Ambassador’s message on the occasion of the 13th Anniversary of the demise of the Dergue Regime and the Founding of the Democracy system in Ethiopia.

Thirteen Years of Peace, Democracy and Development in Ethiopia 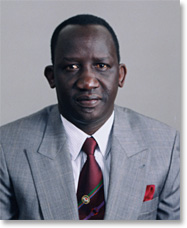 May 28 is, undoubtedly, the most important landmark in the history of the land and the peoples of Ethiopia. It marks the end of the military dictatorship that had wreaked havoc on the peoples for seventeen years; and heralds the commencement of the steady march to peace, democracy and development. As such it’s a day held with high esteem and expectations by the majority of contemporary Ethiopians.
Elsewhere in the world transformation from totalitarian and command economy, to plural democracy and free market is usually accompanied by social up evils. But in Ethiopia thanks to the wisdom and goodwill of the peoples and the Government; the transformation has been largely smooth and peaceful. We also owe this achievement to the generous support we have been receiving from friendly countries like Japan. I therefore seize this opportunity to extend my greetings and best wishes to their majesties the Emperor and Empress, the entire royal family, the government and the people of Japan, as well as to all readers of Japan times and fellow compatriots living in the Country.

The relationship between Ethiopia and Japan came first among all the Sub-Saharan African Nations. Our relation goes back to the time of the defunct League of Nations, when all but Ethiopia in the Sub-Saharan Africa were under European Colonization. Over the years the two countries have forged closer ties and enjoyed excellent relations. The relation has further developed and strengthened in the wake of Japan’s launching of the Tokyo International Conference on Africa Development (TICAD) process in 1993. 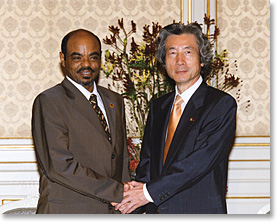 Last year’s TICAD III summit in Tokyo was attended by a record number of 23 African heads of State and Government, including our Prime Minister Honourable Meles Zenawi who was attending the forum for the third time. During his stay in Tokyo Prime Minister Meles met and held talks on bilateral issues with Prime Minister, Junichiro Koizumi and the former Prime Minister and President of Japan-African Union (AU) Parliamentary League, Yoshiro Mori, as well as other high-level officials of the government of Japan. These talks and other, which preceded them, have enabled the two Countries to further cement their bilateral relations, which started more than eight decades ago.

One of the top priorities of the Government of Ethiopia in the last few years has been alleviation of poverty that affects more than half of the estimated population of 72 million. Tothis effect the Government has formulated an appropriate strategy centring on agriculture upon which majority of the people depend for their livelihood. The Government has also developed a Sustainable Development and Poverty Reduction Paper (SD-PRP), widely acknowledged and acclaimed by the International Community including Japan. In addition to this a coalition of all stakeholders in Ethiopia and the International community was launched last year with the aim of enabling the Country to be self sufficient in food within three to five years. These measures coupled with wide ranging economic reforms taken since 1994 have enabled the economy to grow at an average annual rate of 6.4%. The inflation rate is kept at an average of 4%, with foreign currency reserve reaching a comfortable level.

Capacity building is another sector that the Government has given a top priority. Accordingly the Federal Government has earmarked more 2 billion USD for education sector development in the next three years. Activities taken in this regard by the government in the last few years have already bore fruit. Elementary education coverage has now doubled and higher education enrolment tripled. This is besides the private sector participation, which is already reaching 20% enrolment of higher education.

The road sector is also another big priority of the Government. Construction of new roads and upgrading of the old ones have taken a large chunk of the national budget in the last few years. The first phase is now complete and the second phase is allocated an estimated 2.01 billion USD for the next three years.

Japan is currently one of our most active partners in the road sector. A first phase of rehabilitation and upgrading of a trunk road running from the centre of the country to the north, funded by Japanese ODA is already commissioned. The second phase including building a bridge across the mighty Blue Nile is due to start soon. Japan is also involved in funding projects aimed at strengthening the institutional and technical capacity of the road sector. Our Government and the people shall not lose sight to these generous supports by Japan during this critical period of our Country’s development.

Recognizing the crucial role civil service plays in sustainable development, the government has embarked upon far reaching and radical reforms. These reforms are meant at making the civil service efficient and transparent in its operations. Though far from complete, public and Investors’ confidence on the civil service is already returning. Ethiopia is fast becoming one of the few Countries in the Continent with efficient, transparent and accountable Civil service.

Stability and security is one of the most important assets of the country. Although Ethiopia is a large country with diverse religion, ethnicity, language and nine autonomous regions, it offers a stable political and economic environment with very little crime and disorder. Heritage Foundation of U.S. in its 2004 Economic Freedom Index publication noted that Ethiopia offered the second most improved business environment in the World. Business peoples who know Ethiopia in recent years can’t lose sight to this fact.

The Government believes security and stability of Ethiopia is intertwined with that of the Sub-Regional, Regional and Continental Africa as a whole. Chaotic situations and violence in the neighbourhood are not only a threat to their next neighbours and beyond but also detrimental to the continental economic integration envisage under the New Partnership for Africa Development (NEPAD). It’s under this backdrop our Country is actively involved in the search for peace in Somalia, Sudan and the Great Lakes Region. Our Army is also engaged in peace keeping in Liberia and Burundi, as well as assisting the fight against International terrorism in the Horn of Africa.

Obviously critics may cast a doubt on the stability of the Country on the basis of the impasse in the boarder demarcation process between Ethiopia and Eritrea. But we want to assure all our friends that Ethiopia is determined to solve the problem in a peaceful and legal way. That is why we have accepted mediation efforts by the special envoy of the United Nations Secretary General Mr. Lloyd Axworthy and the African Union (AU). We hope the other side will see reasons to start dialogue sooner than later, because this is the only way the current difficulty can be overcome. Other alternatives are simply not beneficial to both countries and peoples.

Politically the Country is also moving forward with the third general election since the fall of the military regime less than a year away. The coming election will see more participation of many opposition parties, some of which had been based abroad up until recently. This is a clear indication of growing confidence on the democratic process taking, place in the country.

To say Ethiopia’s reforms are fast gaining wide international recognition is not an overstatement. After reaching the decision point under the World Bank and International Monetary Fund (IMF) initiative of the Highly Indebted Poor Countries (HIPC), Ethiopia was granted debts cancellation amounting to USD 3.3 billions last month. The money saved from servicing these debts will go a long way in boosting the economy and the development. Evidently this reflects the growing confidence of the International community on the Country’s economic and social reforms.

Since the demise of the military dictatorship on May 28, 1991 Ethiopia has come a long way. The march to peace, democracy and development has been progressing steadily but surely. The people and the Government are committed more than ever to take the reforms all the way up to the end. Encouraged by the progress made so far the International community is also matching their commitments with real measures such as debts relief and direct financial, material and technical supports. Hence, Ethiopia is ready to take off and reclaims its past glory and her rightful place among the Nations of the World.
Thank you 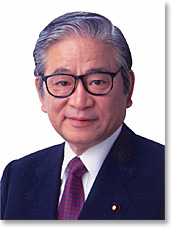 On behalf of the Japan-Ethiopia Parliamentary Friendship League, I would like to extend my warmest congratulations on the 13th national Day of the Federal Democratic Republic of Ethiopia.
Last year marked another historic footprint in the relationship between Japan and Ethiopia. The honorable Prime Minister Meles Zenawi of Ethiopia visited Japan in September for the third time to participate in the Third Tokyo International Conference on African Development (TICAD III). On the occasion, the Prime Minister had a fruitful talk with the Japanese Prime Minister Junichiro Koizumi. Mrs. Sadako Ogata, President of the Japan International Cooperation Agency (JICA) has recently paid a visit to Ethiopia and met the honorable President Girma Wolde-Giorgis. A serious of high-level mutual visits, as well as an increasing number of exchanges at the grassroots level is an indication of steadily growing friendship between Ethiopia and Japan.

I admire the efforts by the Government of Ethiopia to tackle economic and social reforms including food security and to achieve a more democratic society. I sincerely hope these efforts will bear fruits and bring happiness and prosperity to the people of Ethiopia. 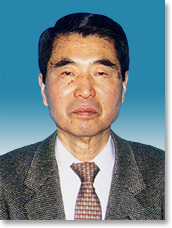 On behalf of the Ethiopian Association of Japan, I would like to extend my sincere congratulations to the people and government of Ethiopia of this memorable occasion, making the 13th anniversary of its Democracy Day.

For more than 30 years now our association has been played the role as a bridge in promoting friendship and goodwill between the two countries. In this regard, I mention a few activities undertaken last year, the Ethiopia branch of the association was launched and a fantastic Ethiopian cultural troupe was invited to perform at several cities and communities in Japan and an enjoyable annual party of Ethiopian Night was held as well. Moreover, the association hosted breakfast meeting in honour of Prime Minister Meles Zenawi of Ethiopia when he visited Japan for TICAD III summit at the end of September. On this occasion, we were able to express our heartfelt welcome and exchange ideas as to how further strengthening the people to people relation between our two countries.

Our main areas of cooperation are offering scholarship program to support university students studying in Ethiopia, exchange of the children’s drawings and issuing newsletters to provide as many information as possible to members and other NPOs and NGOs who relate to Ethiopia. In the area of tourism, early this year, we have sent a delegation of 26 members to Ethiopia who have not visited this fascinating country before. In so doing, we are supporting each other to expand the friendly ties between Japan and Ethiopia.

On this auspicious occasion, I sincerely wish Ethiopia every success in its quest for further prosperity and stability.

Axum Returns to its origin

A 24 meter tall Axum obelisk is one of Ethiopia’s treasures that was looted by Mussolini in 1937 is finally to return to...

Invitation for participation to the Trade Fair held in Addis Ababa The Ethiopian Employers Federation (EEF) will orga...

Legacy of Abebe Bikila lives on down the road to Athens