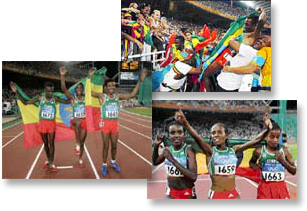 The 2004 Athens Olympic Games officially came to an end with such a spectacular ceremony on Sunday, 29th, August 2004. Ethiopia was one of the participants in the 16 day long big sport events with 24 runners and 2 boxers.

In comparison with the Sydney Olympic, where Ethiopia ranked 20th with 8 medals (4 gold), the outcome of Athens looks short of the expectation, specially when it comes to Women’s 10,000m and Men’s Marathon where the Ethiopians couldn’t defend their titles. Ethiopian athletes, however, deserve gratitude and appreciation for bringing gold medal in Women’s 5,000m to the country and Africa for the first time in the Olympic history.

As Ethiopia maintained first place among African countries and ranked above some countries in Europe, Asia, Latin America and Middle East in Athens, the Ethiopian Olympic squad has received warm welcome upon arrival at the Bole International Airport, Addis Ababa on Tuesday, 31st August 2004.

Support Flood Victims It is to be recalled that the death toll from the August 5th 2006 flooding in Dire Dawa town, Eas...

The 16th Anniversary of National Day