A Land of Beauty

Ethiopia is a land of natural contrasts, from the tops of the rugged Simien Mountains to the depths of the Danakil Depression, at 120 meters below sea level one of the lowest dry land points on earth. Ethiopia has an astonishing variety of landscapes: Afro-Alpine highlands soaring to around 4,300 meters, the splendor of the Great Rift Valley, white-water rivers, Savannah teeming with game, giant waterfalls, dense and lush jungle.

Ethiopia’s National Parks present spectacular visiting opportunities for tourists keen on admiring and enjoying nature. Ethiopia has a rich variety of wildlife many of which are endemic to the country including Walya Ibex, Gelada Baboon and Semien Fox. There are also other animals like herds of buffalo, elephant, giraffe, cheetah, lion, leopard, zebra and a variety of birds. 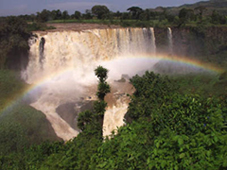 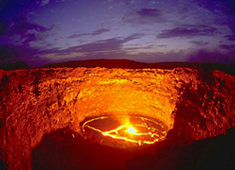 The well-known lake shore town, situated at the southern most end of Lake Tana, first rose to importance in the 16th century and is now an important trading center and tourist town for lake visitors. Popular sites are tankwas, the famous papyrus canoes that are used by local woyto people. The town is also the main departure point for visits to the island of lake.

Tissisat, or smoke of fire, is the local name for the Blue Nile Falls, the most spectacular waterfall in North Africa, and the most dramatic stretch of either the White or Blue Niles. 400 meters wide and dropping over a sheer cliff more than 45 meters deep, the falls generate a curtain of spray (often adorned by magnificent rainbows) that can be seen up to a kilometer away. The falls are about 35 km from Bahar Dar.

Lake Tana is the largest lake in Ethiopia (3,000km square) is the source of the famed Blue Nile which starts its long journey to Khartoun, and the Mediterranean. The 37 islands that are scattered about the surface of the lake shelter fascinating churches and monasteries, some of which have histories dating back to the 13th century. Kebran Gebriel is the principal monastery visited by male tourist from Bahar Dar, with its impressive, cathedral like building first built at the end of the 17th century. However, it should be noted that most of religious houses are open to women. Bird lovers will not miss Fasilidas Island. A sail or cruise on a Lake Tana is one of the most pleasant excursion for visitors to this region, particularly in the heat of summer.

The Sof Omar cave system, 120 km east of Goba in Bale region, is one of the most spectacular and extensive underground caverns in the world. Formed by the Weyb River as it changed course in the distant past and carved a new channel through limestone foothills, the 16 km cave system is an extraordinary natural phenomenon of breathtaking beauty.

The dry, cool caves contain many marvels of natural architecture, including soaring pillars of stone 20 meters high, flying buttresses, fluted archways and tall airy vaults. Finally the river itself is reached, flowing through a deep gorge. You can explore the caves on foot, without special climbing equipment, but proper precautions have to be taken. Torches or other lighting are needed and another must is a map. The most direct route through the first part of the caves takes about an hour. The large central hall of Sof Omar, the chamber of Columns’- so named after the colossal limestone pillars that are it’s dominant feature-is one of the highlights of the cave system.

One of the most important features of this region of Africa is resulted from faulting and cracking eastern side. This has caused the Great Rift Valley, which extends from the Middle East to Mozambique, passing in a north-south direction right through Ethiopia. This shearing of the earth’s surface occurred at the same time that the Arabian Peninsula, geologically a part of Africa, was sundered from the rest of the continent. Volcanic activity, which has continued until today, finds expression in volcanoes in Ethiopia’s Danakil Depression, as well as in the hot springs in many parts of the country.

Danakil region is one of the Earth’s hottest and most inhospitable places. Parts are more than 100 meters below sea level and noon time temperatures sour to above 50 ?. After the Rift opened, much of this area was flooded by the in-rushing waters of the Red-Sea, a flood that was subsequently stemmed by reshlava. Behind these barriers, the trapped in landsea began to evaporate-a process that is a most complete.

The Simien mountain massif is a broad pleatu, cut off to the north and west by an enormous single crag over 60 kilometres long. The tableland is divided by gorges up to 1,000 metres deep, that can take more than two days to cross. Here live the Walia (Abyssinian) ibex, Semien red wolf and Gelada baboon – all endemic to Ethiopia – as well as the Hamadryas baboon, Klipspringer and bushbuck. The lammergeyer, Augur buzzard, Verr eavx’s eagle, Kestrel and Falcon also soar above this mountain. The Semien Mountains National Park covers 179 square kilometres of highland area at an average elevation of 3,300 metres.

Ethiopia’s highest peak, 4,620 metres Ras Dashen, stands adjacent to the park. The scenery is spectacular. The vegetation is principally Afro-Alpine, mountain savannah and heather. Temperature drop below freezing at night. Ethiopia, in fact, has a recorded list of 242 land mammals, of which 28 are endemic. The Semien Wolf is endemic and confined to mountain plateaux with dense tree heather and thickets, intermixed with bogs and swamps with sedge glass and giant lobelias. Semien Mountain’s found 150 kilometres north-east of Gondar.

Awash National Park is the oldest and most developed wildlife reserve in Ethiopia. Featuring the 1,800-metre high Fantalle Volcano, mineral hot springs, and extraordinary volcanic formations, this natural treasure is bordered by the Awashi River and lies 225 kilometres east of Addis Ababa. Oryx, Bat-eared fox, Caracal, Aardvark, Colobus and Green monkeys, Klipspringer, Leopard, Bush-buck, Hippopotamus, Soemmering’s, gazelle, Cheetah, kudu and 450 species of bird all live within the park’s 720 square kilometres. Another feature of this park is the hot springs, or Filwoha. The water of these springs and rivers in the region is 36. The unbelievably clear blue pools, surrounded by down palms, invicte the travelers to wash off the dust.

Lying 350 kilometres north-east of Addis Ababa, this 4,700-square kilometre park is in the arid northern Rift lowlands with vegetation that ranges from semi-dessert and scrub to savannah and open woodland. The park is traversed by the Awash River and among its unusual animals is the Somali wildass-ancestor of the domestic donkey. The 36 mammals within the park are typical of the arid Horn of Africa and include Greuy’s zebra, greater and lesser Kudu, geranuk and the cheetah.

The Park was established as a sanctuary for the endemic land endangered swayne’s hartebeest. The 514-square kilometre park is in the Rift Valley, 2,000 metres above sea-level, between lakes Abaya and Chamo in South Central Ethiopia.

Although mainly open grassland, it also contains areas of savannah woodland and highland forest. The Park’s 84 mammal species include hippo, zebra, buffalo, greater Kudu, reedbuck, Grant’s gazelle, lion and leopard. Seventy-eight square kilometres of the park is water-parts of lakes Chamo and Abaya. The lakes support many species of fish including Nile perch and tiger fish, as well as hordes of hippos and crocodiles.

215 Kilometres from Addis Ababa, the park covers 887 square kilometres of which more than half is water. Lake Shalla is thought to be the deepest lake in Africa north of Equator. Lake Abijatta is circled by 60 kilometres of white shoreline. Both lakes are salaine and several hot springs bubble up by the shore and flow into Lake Shalla.

Besides this natural beauty, these parks best known for their bird life. At Abijiatta, never more than 10 metres deep, greater and lesser flamingos abound, along with white-necked cormorants, herons, storks, spoonbills, ibises, African ducks, gulls and terns. During the northern winter thousands of Asiatic and European ducks and waders migrate to Abijatta’s shore. Lake Shalla is well-known for its large colony of great white pelicans-the most important breeding colony for this species in Africa.

East of the Omo River, and stretching south towards the Chew Bahir basin, Mago National Park is rich in wildlife with few human inhabitants. The vegetation is mainly savannah grassland and savannah bush, extending across an area of 2,160 square kilometres. Mammal species total 81, including hartebeest, giraffe, roan antelope, elephant, lion, leopard and perhaps even a rare black rhino. Temperatures swing between 14°c and 41°c and rainfall is low.

Omo is the largest park in the country, this is 4,068 square kilometres of true wilderness situated in remote south-western Ethiopia. Adjacent to the Omo River, which flows into lake Turkana, it is one of the richest and least visited wildlife sanctuaries in eastern Africa. Eland, Oryx, Burchell’s zebra, Lelwel hartebeest, buffalo, giraffe, elephant, waterbuck, kudu, lion, leopard and cheetah roam within the park’s boundaries. Features include belts of forest along the Omo and Mvirivers and hot springs. Temperatures can be high and rainfall is low.

With their vast moorlands, extensive heath, virgin woodlands, pristine mountain streams and alpine climate, the Bole mountains remain an untouched and beautiful world. Rising to a height of more than 4,000 metres, the range borders the southern highlands of Ethiopia. The establishment of the 2,400 square kilometres park was crucial to the survival of the mountain Nyala, Menelik’s bushbuck and Simien red wolf. The Bale mountain offer some fine high-altitude horse and foot trekking and the streams of the park are well stocked with rainbow and brown trout. The Park contains the highest peak in southern Ethiopia, Tullu Deemtu. The centre of the park is the high saneti plateau of 4,000 metres, which is crossed by the highest all-weather road in Africa.

One of Ethiopia’s least developed parks and few visitors, Gambella National Park is located on the Akobo River system. It was originally created for the protection of extensive swamp habitat and the wildlife there.

The park is 5060 square kilometers in area, and its altitude ranges between 400 and 768 meters. Rainfall is 1500 mm a year, falling between April and October. Temperatures are high. The vegetation here is mainly grassland and Terminalia. Combretum wooded grassland, with extensive areas of swamp.

The Park contains forty-one species, many representative of neighbouring Sudan and not found else where in Ethiopia, such as Nile lechwe and the white-eared kob, the latter migrating in the large numbers: Roan antelope, topi, elephant, buffalo, lelwel, heartebeest, lion, and giraffe are also present. The most important of the 154 bird species present here is the whale-headed stork, an unusual large-billed, tall bird seen standing in the swamps.