Ethiopia, an old country beyond all imaginations, has culture and traditions dating back over 3000 years. With over 80 different Ethnic groups with their own language, culture and traditions. The strong religious setting, celebrations and festivals play an important part in every ones daily life. Church ceremonies are a major feature of Ethiopian life. The events are impressive and unique. The Ethiopian Orthodox Church has its own head, follows its own customs, and is extremely proud of its fourth century origins.Ethiopia’s Islamic tradition is also strong and offers colorful contrast, particularly in the eastern and south-eastern parts of the country. In fact, there were Ethiopian Muslims during the lifetime of Prophet Mohammed. This rich religious history is brought to life in the romantic walled city of Harar, considered by many Muslims to be the fourth "Holy City" following Mecca, Medina, and Jerusalem.

The Amhara women wear dresses that are tight bodice and full skirted. The dresses are bright white with colored embroidery and woven borders. The men are resplendent in white jodhpurs and tunics. Although originally most of the border designs were based on the varied design of the Ethiopian cross, today you sometimes see more modern motifs – flowers, birds and even airplanes.

The Muslims of Harar wear colorful dress. The men often dress in red, purple or black. The women of Harar part their hair in the middle and make large buns behind their ears. Harari women have been known for their basketwork for centuries and still weave intricate creations from coloured fibers and grasses. Harar is also famous for the work of its silversmiths, who craft beautiful anklets, necklaces, arm bands, silver chains, bangles and earrings out of the precious metal. Although these items can be purchased at the market, some of the best selections can be found in the homes of the craftsmen and women.

The Lower Omo is home to a remarkable mix of small, contrasting ethnic groups not only the Bume and Konso, but also the Gelebe, the Bodi, the Mursi, the Surma, the Arbore, and the Hamer, to name but a few. Lifestyles are as varied as the tribes themselves. Lacking any material, culture and artifacts common to other cultures, these tribes find unique ways in which to express their artistic impulses. Both the Surma and the Karo, for example, are experts at body painting, using clays and locally available vegetable pigments to trace fantastic patterns on each other’s faces, chests, arms, and legs. These designs are created purely for fun and aesthetic effect, each artist vying to outdo his fellows.

The women of Tigray wear dozens of plaits (shuruba) tightly braided to the head and fuzzing out at the shoulders. Young children often have their heads shaved, except for a tuft or a small tail of plaits, which are left so that if God calls them ‘He will have a handle by which to lift them up to Heaven’.

The Oromo people, offer their products for sale in open markets. They produce the more familiar grains and vegetables of established agriculture. Coffee, one of the world’s favorite beverages, is believed to have been ‘born’ in this region.

The Anuak people are found in the Gambella region. The indigenous Anuak people are mainly fishermen in this region, and the crops they do grow such as: sorghum does not reach their full potential because of the extremely basic methods employed. There are few large villages, as people prefer instead to group together around a mango grove in the extended family compound of no more than five or six huts.

The Afar, most of whom occupy one of the most inhospitable desert or semi-desert areas in the world, have long been regarded as a fierce and warlike people. They are certainly proud and individualistic, and somehow manage to eke a living out of the challenging wilderness in which many of them live. The majority of the Afar are semi-nomadic pastoralists, but a minority have settled, notably those in the Aussa oasis. Almost all are Muslims, and are organized into confederacies, tribes, and clans. The nomads live in small, isolated groups with the camel as their beast of burden, and keep sheep, goats, and cattle.

The lowland Somali wear long, often brightly coloured cotton wraps, while some of the cattle-herders in the lake district have clothing made of skins.

The Southern region comprises hundreds of ethnic groups. The region of the south of Konso and Yabello is inhabited by the Konso people. Except for trading with the neighbouring Borena for salt or cowrie shells, outside influence had, until recently, virtually passed by the Konso. The cornerstone of Konso culture, however, is a highly specialized and successful agricultural economy that, through terracing buttressed with stone, enable them to extract a productive living from the none-too-fertile hills and valleys that surround them. 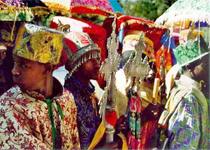 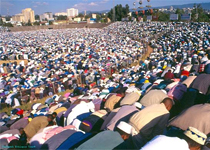 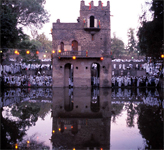 Ethiopia still retains the Julian calendar, in which the year is divided into 12 months of 30 days each and a 13th month of 5 days and 6 days in leap year. The Ethiopian calendar is 8 years behind the Gregorian calendar from January to September and 7 years behind between September 11 and January 8.

Enkutatash means the "gift of jewels". When the famous Queen of Sheba returned from her expensive jaunt to visit King Solomon in Jerusalem, her chiefs welcomed her bolts by replenishing her treasury with inku or jewels. The spring festival has been celebrated since this early times and as the rains come to their abrupt end, dancing and singing can be heard at every village in the green countryside.

But Enkutatash is not exclusively a religious holiday. In Enkutatash, children dressed in new clothes dance through the villages, distributing garlands and tiny paintings. In the evening every house lights a bonfire and there is singing & dancing. Today’s Enkutatash is also the season for exchanging formal new year greetings and cards among the urban sophisticated – in lieu or the traditional bouquet of flowers.

Ethiopia’s most celebrated festival is Timket the Epiphany, which falls on 19th January and is the easiest for visitors to witness and enjoy. Timket is an extremely colourful three days festival commemorating the baptism of Christ. The dramatic and colourful procession of Timket starts on the eve at which priests take the Tabot (which symbolizes the Ark of the covenant) containing the Ten Commandments from each church. Concealed by an ornamental cloth, it is taken to a tent, close to a consecrated pool or stream, accompanied by much ringing of bells, blowing of trumpets and the burning of incense. The following morning the great day itself, the church officials, resplendent in their gorgeous regalia, assemble around the Tabot and sprinkle and receive the renewals of their vows. If the body of water is large enough, some people will immerse themselves. After this is done, the congregation follows the bishops, elders and clergy as the Tabot is carried back to the church from whence it came accompanied by much singing and dancing. The third day is devoted to the feast of St. Michael, the archangel, one of Ethiopia’s most popular saints.

In Addis Ababa, many tents are pitched at Jan Meda, to the north east of the city center. At 0200 there is a mass and a crowds attend, with picnics lit by oil lamps. At down the priest extinguishes a candle burning on a pole set in a nearby river using a ceremonial cross.

Since October and the end of the rains, the country has been drying up steadily. The sun blazes down from a clear blue sky and the festival of Timket always takes place in glorious weather.

Christmas, called Lidet, is not the primary religious and secular festival that it has become in Western countries. Falling on 7 January, it is celebrated seriously by a church service that goes on throughout the night, with people moving from one church to another. Traditionally, young men played a game similar to hockey, called genna, on this day, and now Christmas has also come to be known by that name.

Finding of the True Cross (Meskal)

Meskal has been celebrated in the country for over 1600 years. The word actually means "cross" and the feast commemorates the discovery of the cross upon which Jesus was crucified, by the Empress Helena, the mother of Constantine the Great. The original event took place on 19 March 326 AD. but the feast is now celebrated on 27 September.

Many of the rites observed throughout the festival are said to be directly connected to the legend of Empress Helena. On the eve of Meskal, tall branches are tied together and yellow daisies, popularly called Meskal Flowers, are placed at the top. During the night those branches are gathered together in front of the compound gates and ignited – This symbolizes the actions of the Empress who, when no one would show the Holy Sepulcher, lit incense and prayed for help. Where the smoke drifted, she dug and found three roses. To one of the three, on the True Cross of Jesus, many miracles were attributed.

In the Middle Ages, the patriarch of Alexandria gave the Ethiopian Emperor Dawit half of the True Cross in return for the protection afforded tot he Coptic Christians.

Meskal also signifies the physical presence of part of the True Cross at the church of Egziabher Ab, the remote mountain monastery of Gishen Mariam located 483 kms north of Addis Ababa in Wello administrative zone. In this monastery, there is a massive volume called the Tefut written during the reign of Zera Yacob (1434 – 1468), which records the story of how a fragment of the cross was acquired.

During this time of the year flowers gloom on mountain and plain and the meadows are yellow with the brilliant Meskal daisy. Dancing, feasting, merrymaking, bonfires and even gun salutes mark the occasion. The festival begins by planting a green tree on Meskal eve in town squares and village market places. Everyone brings a pole topped with Meskal daisies to form the towering pyramid that will be a beacon of flame. Torches of tree branches tied up together called "Chibo" are used to light the bundle called "Demera". In Addis Ababa, the celebrations take place in Meskel Square, to the south east of the city center.

St. Gabriel is the patron Saint who guards over homes and churches. There is a huge pilgrimage to St. Gabriel’s Church on Kulubi hill, which is on the route from Addis Ababa eastwards, about 70 Kilometers before Dire Dawa. Many pilgrims carry heavy burdens as penance, children are brought to be baptized and offerings are made to be distributed to the poor.