Ethiopians to defend their World XC title in Fukuoka

The Ethiopian Athletics squad, which consists of 29 famous senior and junior runners, are coming to Fukuoka with a high spirit to defend their titles and to fly high our National Colours: Green, Yellow and Red:

Kenenisa Bekele, the 2004/2005 World Athlete of the year, who became the first man to win world titles in three surfaces (over the cross country, outdoor and indoor) will hope to win his fifth short and long course double in Fukuoka, while Tirunesh Dibaba will be seeking to defend both her short and long course double victories of last year in France. 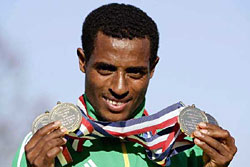 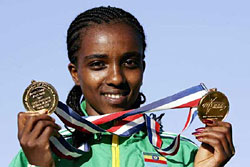 THE EMBASSY OF THE FEDERAL DEMOCRATIC REPUBLIC OF
ETHIOPIA WISHES THE BEST RESULTS FOR OUR ATHLETES!!

Time Table of the Competition and Athletes from Ethiopia

From Tenzin to Marine World by Nishitesu Bus (60min.)

It's my pleasure to announce the launching of homepage of the Embassy of the Federal Democratic Republic of Ethiopia in ...

Axum Returns to its origin

A 24 meter tall Axum obelisk is one of Ethiopia’s treasures that was looted by Mussolini in 1937 is finally to return to...

Ethiopia receives debt relief totaling 3.6 bln. USD from the World Bank The World Bank announced that it has totally ca...

The Embassy exhibits Ethiopia's authentic and diverse culture to the Japanese public. The Embassy of the Federal Democr...

Legacy of Abebe Bikila lives on down the road to Athens

As the Olympic games return to their original roots and get underway in Athens this summer, the legendaries who over the...
トレード・フェア
福岡世界クロスカントリー・チャンピオンシップとエチオピア
ホーム
ARCHIVE
タイトルとURLをコピーしました