The newly appointed Ethiopian Ambassador to Japan, Abdirashid Dulane said that the bilateral cooperation between Ethiopia and Japan has been further enhanced.

The Ambassador made the remark while presenting his credentials to Emperor Akihito of Japan on April 21st, 2006.

Ambassador Abdirashid said the visit due to be held by Prime Minister of Japan, Junichiro Koizumi is an indicator of the ever-strengthening relations between the two countries

The Ambassador also presented greetings and letter of felicitation from President Girma Wolde-Giorgis to Emperor Akihito.

Emperor Akihito on his part expressed beliefs that the long-standing ties between his country and Ethiopia would be further strengthened. 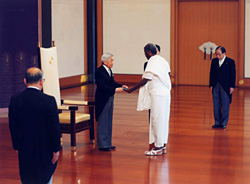 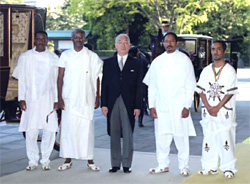 It's my pleasure to announce the launching of homepage of the Embassy of the Federal Democratic Republic of Ethiopia in ...

The 17th Anniversary of National Day