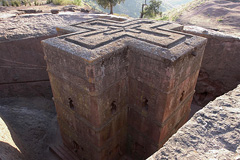 Known as the Eight Wonder of the world, Lalibela is a revered spot to Ethiopians and foreigners alike. One is baffled by the immensity and beauty of twelve monolithic churches that were hewn out of rock over eight centuries ago.
The town is named for King Lalibela, who was born there in the early 12th century, and transformed into a natural wonder. At the moment of the future king’s birth, he was surrounded by a cloud of bees, and believing these to be the soldiers that wound one day serve her son, his mother gave him the name Lalibela, which means “the bees recognize his sovereignty”.
Legend has it that King Lalibela enlisted the help of angles to produce the miraculous rock-hewn churches. Standing in two groups, on either side of the Jordan River, the churches are still house of worship today. One of the churches is believed to contain the tomb of the king himself.