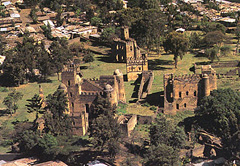 Gondar has been called the Camelot of Africa. The capital of Ethiopia in the time of the 17th century. Emperor Fasilidas, the city is celebrated for its castle places built by the Emperor and many of his successors until the middle of the 19th century. The ‘imperial quarter’ is one of the most impressive vestiges of Ethiopia’s great past. Other treasures of Gondar include the 18th century palace of Ras Beit, the bath of Fasilidas the ruined palace of Kusquam, and the church of Debre Berhar Selassie with its unique murals.