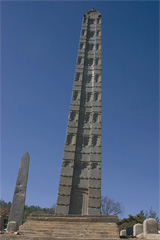 Axum has a history that goes back more than 3000 year. It was the center of one of the first civilizations to adopt Christianity as a state religion. Axum’s greatest significance, however, is as the epicentre of the Queen of Sheba dynasty, upon which rests the rotion of the sacred kingship of the Semitic peoples of Ethiopia.
Axum is renowned for the world’s tallest monoliths, or Obelisks, carved from single pieces of rock. Some experts believe they were erected to work the passing of some ancient royal personages; others say that they had an astronomical function. The largest obelisks, measuring over 33 meters, fell long and now lies in pieces.
The oldest church in Africa, south of the Sahara, is the first St. Mary of Zion Church, originally build around the 4th century. Emperor Fasilidas replaced it with a newer church around 1635 which is still a place of active worship, notable for its crenellate, fortress-like walls.